Are Great Leaders Born or Made? 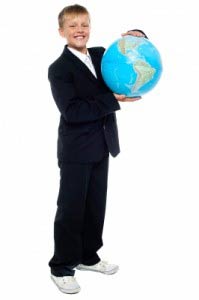 I joined a lively debate on a ‘radio phone in’ recently that asked a similar question to mine above but in connection with ‘entrepreneurs’. Not surprisingly most of the contributors were entrepreneurs and nearly all of them had stories of parents or grandparents that were, themselves entrepreneurial. As a result of this the vast majority felt that their career choice was based on their ancestry and that people without this genetic influence were far less likely to be successful entrepreneurs.

I have to say that I totally disagree, and not just in the case of entrepreneurs, in every aspect of skill, ability and character trait that we as human beings are capable of. To agree with the genetic argument means we aren’t in control of our lives, or our destiny. What WE become is merely the sum of what our ancestors were!

I cannot accept this at all as this belief has the potential to stop any individual ‘trying’ new things. It might indicate that if you wanted to learn to play a musical instrument, don’t pay for lessons until you’ve checked you have musical ancestors. Want to be a professional footballer? Want to be a manager or a business leader? Want to get a degree? Better check the family tree first or you might be wasting your time!

Perhaps the key difference is genetic after all, a gene that is dormant in some people and active in others. A gene that doesn’t accept apathy and acceptance and instead drives the individual to act. The same gene is the one that keeps them going even though at first they don’t succeed. A gene that sustains them through the learning dip rather than allows them to give up.

A true leader is a visionary and great business leaders are the ones that have the capability to gauge future trends and steer their businesses accordingly. Imagine a large business as being like an oil tanker in the sea and the leader of the business being the captain. It takes up to 3 miles to stop an oil tanker and half that distance just to alter course. Many businesses have gone to the wall because the leaders didn’t alter course in time. For example they didn’t appreciate and embrace the opportunities and threats provided by the internet or they weren’t prepared for the recent recession.

Are vision and business tactics purely genetic? No! Can they be taught? Yes!

I firmly believe that in the card game of life we are all dealers and if we don’t like our current hand, we have the capability to shuffle the pack and deal again. We can learn new skills, we can control our attitude and we can decide how we want to communicate with other people. We can be whatever we want to be regardless of our ancestry!