How to Criticise Without Being Critical 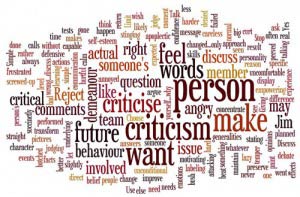 Stop for a moment and ask yourself…why do I need to criticise someone else? Simple question, simple answers. Because they have failed, botched, screwed-up, or not performed to the level I expected, I have to let them know how I feel about it. Yes, that’s normal, but what do you want to happen as a result of the criticism? What do you want the person to do in the future? How do you want them to change? How can you criticise without being critical? It’s a hard one to judge, because, more often than not, emotions are involved. You may be frustrated, angry, annoyed, peeved, apoplectic or slightly uncomfortable. But if you approach criticism with a temper or an angry demeanour, you are less likely to think straight and may say or do something you wish you hadn’t. Giving criticism tests your communication skills. If you do it right, you can transform it from a stinging, negative message to an empowering, motivating experience for all involved. Choose words that address the real issue. Reject generalities like ‘always’, ‘never’, or ‘worse’. They will make the team member defensive and make them feel as if you are attacking them as a person. Discuss the behaviour rather than the person themselves. There’s a big difference between ‘Jim is lazy’ and ‘Jim needs to return more calls from customers’. Say what you actual see, in words that paint pictures to the team member. Say things that can’t be denied. Use facts, not opinions. This makes it harder for people to argue or debate the issue. Reject words like ‘unacceptable’ or ‘careless’. These do not discuss the actual events; instead, you are labeling and judging someone’s behaviour. Don’t question or criticise someone’s character or personality. Limit comments to specific actions you want the person to modify or improve. Be direct, stating your comments succinctly. Don’t beat about the bush, but don’t be curt or hurtful. This is not the time to make the person feel bad. Talk to them with the underlying belief that they are capable of doing better and learning from whatever it is you are talking about. Above all, preserve the person’s self-esteem. You don’t have to concentrate on what’s gone wrong…discuss what they could do in the future to make it right. The past cannot be changed…only the future can be planned for. If you maintain your calm demeanour, discuss the effects of what went wrong and what can be done about it, and unconditional confidence in their abilities, there is no reason why any criticism you have to display has to seen as being critical. Thanks again Sean Sean McPheat Managing Director