How To Run A Meeting Your Team Will Actually Enjoy 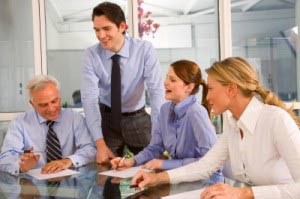 We’ve all experienced the meeting from hell; too long, boring and one or two people dominating proceedings.

Whilst communication is an important element in all organisations, many people dread going to meetings. So, the challenge is to run meetings that people want to attend rather than a waste of their time. Here are a few tips for making your meetings a fun place to be.

No we don’t mean kiss everybody in the meeting, although this could be one way to liven it up. It’s the old mantra for presentations – Keep it Short & Simple!  Keep it short as possible and value people’s time. Keep it simple by restricting how much you decide to cover in one meeting.  Most people’s attention span is quite short and even if the meeting is interesting, they will be happier to attend if they know it will be over relatively quickly.

You can be very creative with this. It could an amusing story or anecdote a bit like the funny story at the end of the news. Find something from your industry which might even illustrate a point you wish to make. Some video clips on YouTube may also provide an entertaining element for your meeting. Sales teams often use team meetings to improve product knowledge by having a quiz on new products.

Use The Toffee Technique

One common problem affecting meetings is that it becomes a moaner’s paradise or you have at least one person who likes the sound of their own voice and goes on and on and on! A fun way to stop people being negative at every meeting or going off at a tangent is to have a bowl of toffees. The idea is that if somebody is perceived to be moaning or talking for too long that anybody in the team especially not the manager can throw that person a toffee. The rule is the person chews on the toffee and cannot talk again until they have finished it! One of the management teams we have worked with told us that they bought a huge gobstopper to give to their director during one of their meetings!

Have Different People Host The Meeting

Having someone new every time has two key benefits. The first one is that everybody over a period of time will appreciate what it takes to plan and run a meeting, a useful skill for many situations, both inside and outside work. The second benefit is that people will be genuinely interested to see how the new chairperson will run their meeting and look for tips to use when it’s their turn.

Use The Meeting As An Excuse To Congratulate Or Recognise Individuals

Recognition is one of the main ways to motivate individuals. The idea is to look for an opportunity to highlight behaviour that you would like to encourage. There are certain recommendations; be specific and be sincere. This means specifically mention the actual behaviour you have observed rather than be too vague. Saying something like, ‘Jane was very good at customer service this week’ is not good enough. It would be better to say something like, ‘Jane handled a tricky customer complaint this week. She was very good at demonstrating empathy with the customer, showing that she took the complaint seriously. This resulted in additional sales to this particular customer!’

In terms of being sincere, genuinely looking for good practice or something that impressed you, is much more credible than manufacturing a situation just for something to say.

So, in conclusion, give your team ‘reasons to be cheerful’ so they look forward to the meetings and it will make them much more productive. Have fun!