Respect, Stop Assuming You Have It & Start Earning It! 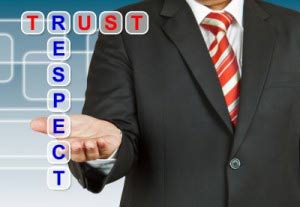 A lot of managers confuse respect with authority and then wonder why their people don’t always do what they have asked them to do. Managers are appointed to positions of authority but nobody can ever be appointed respect. Respect is never given, instead it is something that has to be earned.

Many managers I meet assume they have respect because employees will behave differently to their faces than they do when they are not there. When in direct interaction the employee will say exactly what they know the manager wants to hear. As soon as the manager is not in sight they revert to what they want to do.

It is sad when I hear managers confidently declare that their people respect them, only to experience the total opposite in training sessions. In order to try and help the situation I will try and find out what the manager does or does not do that is causing the distrust or lack of respect. These are just some of the things that are mentioned:

So how do we earn respect? Well those of you that have survived parenting a teenager or two will know just how difficult that can be! Our own offspring seem to act perfectly reasonable when in the company of others but show scant respect for us.

Here are my top tips for building respect, some are common sense but as always common sense is not common practice:

It is obviously easier to do these things when starting a new role with a new team. If you are not already exhibiting the above then you cannot expect them to change their opinion of you overnight. Be patient and work at things over a number of months.

Thank you for reading. Respect!