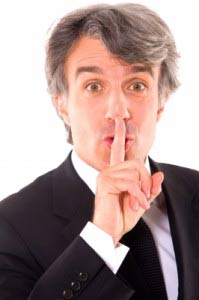 The most dynamic communicators I have ever come across don’t say very much.

Instead of trying to talk more and blind people with the level of their so-called intellect, charismatic managers grab attention by treating their words as precious resources. They only speak when they have something to say.

By keeping quiet, listening well and expressing your points in the fewest words possible, you gain a persuasive edge. People give undivided attention to those whose every word counts.

Instead, try to appreciate the power of silence. This isn’t easy. Many people feel self-conscious when there are moments of silence in conversations. Some people think they may appear unsure, uncertain or lacking in confidence if they don’t always have something to say.

Remember that you are always communicating, even when you’re not speaking. So the silence may actually be telling someone something without you opening your mouth. Silence gives everyone a chance to reflect on what’s been said so far, and helps to disarm touchy or emotionally-charged subjects.

If you over-talk, you may bore others, because they may switch off if the things you are saying don’t add any value to the conversation.

When you feel the urge to talk, ask yourself if it could wait. Listen more than you speak. As the saying goes…best to keep silent and people think you’re a fool, than to open it and prove you are one!

So what can you do? Here are some ideas:

Remaining silent helps you to pick up an awful lot of information. Share your ideas when necessary, but try to keep your ego in check when conversing. That way, you will earn respect and actually learn something!