The ‘Chess Master’ Turned Global CEO – Is That Logical? 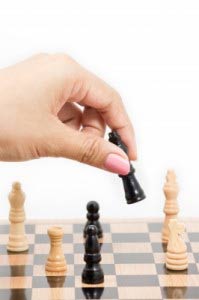 I read a great interview on the BBC web site this week. In it Matthew Wall a BBC Business Reporter interviewed Alan Trefler the chief executive of business software group Pegasystems. The first question got me hooked but it came from the interviewee not the interviewer; “Why are we so bad at thinking logically?” asked Alan Trefler with genuine puzzlement.

In the interview Alan Trefler was likened to Star Trek’s Mr Spock who was also known for his prowess at chess as well as his logic. Where we see chaos, randomness and inefficiency, logical people see the potential for order and smooth running. “Business processes are a lot like chess,” says Mr Trefler. “First you need to look at the board, absorb all the data, recognise patterns, analyse, develop a strategy, then continually revise and develop that strategy as the game progresses.”

It is this ability to break up the complexities of business and customer interactions into understandable, sequential steps that has helped Mr Trefler create a company that recently reported total revenues of $356m (£221m) and net income of $22.5m for the first nine months of 2013. Its shares are listed on the Nasdaq index in New York. The Massachusetts-based business now has a stock market value of more than $1.8bn, with clients including Vodafone, Cisco, HSBC, United Healthcare, Heathrow Airport Holdings and Bank of America.

“I enjoyed the intellectual challenge,” he says, “the analytical thinking. I had an intuitive assessment of the game. The chess board looked almost like a heat map to me – I could see the pressures the pieces were exerting.”

So what do you think? I have met many very successful entrepreneurs that seemed far from logical and in some ways quite chaotic and random with their thinking. Their strength was in their vision, energy and sheer bloody mindedness to make something work, rather than pure logic. Both approaches therefore work and on Star Trek even Spock struggled to be logical all the time.

I think the story of Alan Trefler is a great one as his business creates software to help businesses be more logical in their approach but in a way that is easily understood by those who don’t have a logical approach themselves. He has turned his great strength into a business that supports others.

Leadership and management is also similar as it requires a good deal of logic to define process and procedures when dealing with people but it also requires a whole heap of illogical ‘feelings’ and ‘emotions’ to make it effective. Leaders that rule based on pure logic and without charisma are rarely remembered fondly. Those that had charisma but no logic are remembered but they usually didn’t last long.

Like most things in life it comes back to balance and a cocktail of both logic and charisma is needed to be an effective and successful leader.