This Is Why Change Is So Hard 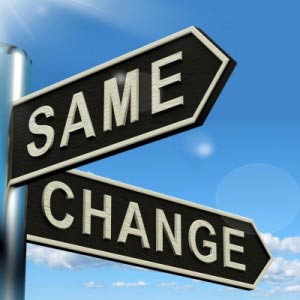 In ‘The Heart of Change’, John Kotter and Dan Cohen report on a study they conducted with Deloitte Consulting. Having interviewed over 400 people from more than 130 companies, they hoped to understand why change happens in large organisations.

Kotter analysed the data and said that in most change situations, managers initially focus on strategy, structure, culture or systems, which leads them to miss more important issues. Kotter states:

“The core of the matter is always about changing the behaviour of people, and behaviour change happens in highly successful situations mostly by talking to people’s feelings.

This is true even in companies that are very focused on analysis and quantitative measurement. In highly effective change situations, people find ways to help others see the problems or solutions in ways that influence emotions, not just thought”.

In other words, when change works, it’s because leaders speak to people’s hearts as well as their minds.

Kotter says that most companies think change happens in this order: ANALYSE-THINK-CHANGE.

But big change situations don’t look like that. In most cases, the parameters aren’t well understood and the future is fuzzy. The analytical arguments for change do not work well. (For example, if someone is reluctant to marry their long-term partner, discussing the tax benefits and rent savings are probably not going to swing it for them!).

In almost all big change situations, the sequence of change is thus:            SEE-FEEL-CHANGE.

You’re presented with information that makes you feel something. Either pain associated with the current position, or future reward promised if change takes place. Whatever it is, it hits you at the emotional level.

So, if you’re faced with changes in your own business, naturally talk through the analysis and think through the repercussions. But if you want your people to accept, get involved with, and drive the change forward, you need to identify the emotional impact on them.

Have some people who will be affected by the change been working with you for a long time? If so, what will the psychological effects be for them? How will you monitor the changes they have to go through? What emotional impact will it have on them? You need to consider this as they go through the change.

Conversely, what about new people? Do they still need some support as they go through the changes? What emotional impact might it have on them? Have you made sure they know why the changes are necessary?

Trying to fight inertia and indifference to change with analytical arguments is like throwing a fire extinguisher to someone who’s drowning. The solution doesn’t match the problem.

Analyse how people feel about the changes they are going through. Deal with the emotional aspect. All the analytical, rational, process-driven arguments in the world won’t help if people feel their emotions aren’t tied to the results.

Do this effectively, and they will buy in to your ideas and help you deliver the necessary changes.