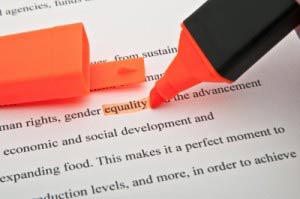 As leaders and managers we have responsibility for upholding The Equality Act 2010 which legally protects people from discrimination in the workplace and in wider society.

The Equality Act 2010 replaced previous anti-discrimination laws with a new, single Act making the law easier to understand and strengthening protection in some situations. It sets out the different ways in which it’s unlawful to treat someone.

Before the new Act came into force there were several pieces of legislation to cover discrimination, including:

I hope that you never have need to investigate instances of discrimination in your organisation but the chances are you probably will. Your human resources (HR) department is the obvious first port of call but if your organisation is too small for a dedicated HR department then there are some exceptional freelance specialists you can talk with to get professional advice.

When it comes to equality of any kind I say ‘vive la difference’ which is French and the literal translation is ‘long live the difference’, although the saying has been used specifically as a tongue in cheek reference to the opposite sexes. I love ‘difference’ and the best organisations I have worked for were the ones that absolutely embraced diversity and the worst where managers and leaders tended to surround themselves with (clones) people just like them!

I blogged a few weeks ago about the very sad passing of former South African President Nelson Mandela and one of his famous quotes is “No one is born hating another person because of the colour of his skin, or his background, or his religion. People must learn to hate, and if they can learn to hate, they can be taught to love, for love comes more naturally to the human heart than its opposite.”

So where do we learn prejudice? Well sadly, when it comes to many ‘sad’ things, it is the feelings of our parents. Their experience of life can be embittered by how people have treated them and whilst they may not speak of some things in public they speak of them within their homes. With this in mind I was intrigued by a tweet I saw the other day which read “It’s a very rare person that can take something they’ve learned, see it for fallacy and strive to find another way.”

This tweet got me thinking about my own upbringing and some of the prejudices of my own parents. To be fair to them, they were both born in the mid 1940’s at the end of the Second World War.  This horrible war had seen many atrocities inflicted by all sides and deep resentment was inevitable. Then, Just after World War II ended in 1945, the first groups of Britain’s post-war Caribbean immigrants settled in London. As they grew up imagine what stories my parents would have been told by their parents!

As a result of my upbringing I was taught to mistrust certain members of society based on ethnic background. It was not just a colour thing it was based on WWII as well. Thankfully I did what it had said in the tweet I read (“It’s a very rare person that can take something they’ve learned, see it for fallacy and strive to find another way.”), I realised that my parents were wrong and instead saw ALL people for what they are, individuals, that regardless of colour or creed, each had the capacity for good or evil within them.

I’m therefore pleased to say that what I have taught my children is very different to what I was taught! And that is what we say in Twitter Land is #Progress.