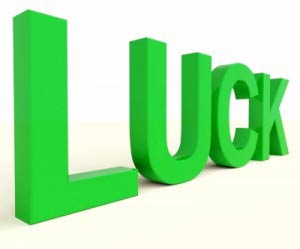 I have just read an interesting article on LinkedIn by Dharmesh Shah the Founder and CTO at HubSpot. The piece was all about ‘luck’ and how anyone can create their own? The ‘luck’ Dharmesh refers to is not the kind that wins you the Lotto but the luck that brings you success in business.

It was a great blog and I totally agree with all the comments and ideas he put forward. Here are his five main points based on what other “lucky” people do:

3. They expand their boundaries.

The article gave some examples and ideas for each point and I was delighted to be able to say “I do that” to all of them. So I must be lucky, right? Well I believe that whether we are lucky or not is a personal attitude and NOT what other people think about us! From that perspective I believe I am one of the luckiest people alive! For me one word describes all 5 of the points listed above ‘actions’ and I have always put my own luck down to ‘action’.

During my career I have launched a number of businesses from scratch and sometimes with just a few hundred pounds of capital. Some have done well and I have sold them on but others have failed miserably and expensively.

I have a friend that invented something a number of years ago that both he and I feel is a great idea that could become a great business. However, he is in his early 50’s and has never been without a PAYE job, as a result he hasn’t ever taken the plunge to get started.

The difference between my friend and I then is ‘action’, when it came to self-employment I went for it but he can’t. So what are the barriers of action? Well the word ‘confidence’ certainly comes to mind and ‘fear’ also plays a massive part.

Look back at Dharmesh’s list of five above and think about ‘action’ and ‘fear’? None of the five tasks (or habits) are possible without ‘action’ and action requires ‘confidence’. Fear is not a word associated with confident people. Think about it, have you ever met a successful business leader or manager that lacked confidence? These are often the people that others refer to as being ‘lucky’.

Success (or luck) is a result that comes when people fight off their apathy and fear and take action. You might say that not all action is successful and you are right. The difference is that some people learn from every experience good or bad. These are the ‘lucky’ ones in my view, the unlucky ones are those that don’t learn when things go wrong and instead decide not to bother trying again.

What do you think? Are you lucky?

Thank you for reading.