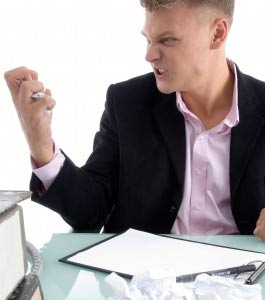 Tom had been working on a major project for two weeks, carrying his laptop between his home and the office and putting in countless hours of overtime. The report he was working on was likely the most important of his career thus far – his boss had never assigned him and his team a project of such magnitude before this one.

One morning Tom walked into the office, set up his laptop, and walked away to get a cup of coffee. He was starting to feel the pressure of the looming deadline and had begun to become frustrated with the slow pace some of his teammates were taking with their contributions to the research. As he was settling back into the office to begin working, a member of his team came in and sat across from him at his desk. They began discussing files and the team member reached across to grab and handful of relevant papers. On his way back across the desk, he accidentally knocked over Tom’s cup of coffee – the one he had placed just a little too close to the laptop.

After a frozen moment of terror, both men watched as the coffee settled into the small keyboard, working its way into the computer’s mainframe. There was an ugly grinding sound before the computer halted to a stop and the screen went completely blank. Tom’s project was destroyed – no one would be able to recover the lost document in time.

Tom went absolutely crazy. He couldn’t think straight, began yelling obscenities, and blamed the poor soul on the other side of the desk for his misfortune. His behavior escalated until he had progressed from anger to outright rage. It took three members of upper management to calm him down.

Tom was understandably upset, but was his rage justified? It was not. There is never a good reason for behaving in an inappropriate manner at work. Tom was devastated because he was in a new management position, was coordinating his first project, and felt as though he had just failed.

If Tom had remained calm and collect, he could have mourned his first draft and then collected his team for a meeting to determine the quickest and most effective way of recreating the work that had been done thus far. Each member of his team had a role in the process and, with a little bit of work, what he had done so far could have been duplicated. Instead, he ignored his feelings of frustration until he was pushed over the edge by a single incident. This is a terrible example of anger management.

My example about Tom’s situation is a slight exaggeration. Most people won’t react quite as harshly when they lose their tempers, but their anger will still be blinding. Anger is a natural human response to a bad situation, but you can control your anger and choose your own reaction.

How will you choose to respond?