The Wrong One: Why David Moyes Had To Go 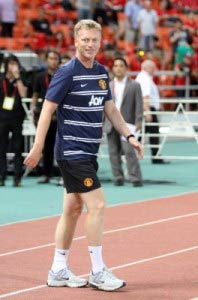 As a neutral football supporter watching the Premier League this season, the demise of Manchester United has been absolutely wonderful to watch.

Seeing them lose at home on a regular basis and watching the once smug Stretford End cry into their pies in the stands has been a welcome change to the long-standing dominance they have had. The reaction to the sacking of David Moyes has been interesting – but in all honesty I cannot see how Manchester United had a choice.

Record after record was being smashed by David Moyes: the ruthless nature of social media latched on to every mistake – adding to the humiliation.

They were knocked out by Swansea in the third round of the FA Cup AT HOME.

People may mock Arsenal’s lack of trophies however it looks likely they will qualify for the Champions League – Manchester United will miss out for the first time in 18 seasons.

In the eight matches against the top four, Manchester United took five points from a possible twenty-four.

It was no wonder there was a grim reaper taunting Moyes from the stands at Goodison Park – he was not the only one who could sense the end was nigh. Some people will argue that Sir Alex Ferguson was successful because of the time he was given at Old Trafford.

But looking at it in the context of the modern game, Moyes was given more than enough time (pretty much an entire season) and more than enough money to do a significantly better job than he has done.

The modern game heavily relies on sponsorship and television broadcasting, merchandise and advertising. Manchester United are also being floated on the stock market.

Businessweek investigated where Manchester United’s money came from: 38% came from broadcasting; 28% came from ticket sales; 24% came from sponsorships and 7% came from merchandise.

Not qualifying for the Champions League will have implications both on and off the pitch for United.

Admittedly it would be over dramatic to suggest Manchester United are doomed from these lost revenues but it is a far from beneficial situation.

On the pitch this will have a detrimental effect: the pulling power of signing for Manchester United will be lessened further by not playing in the Champions League.

Even with the guarantee of Champions League football, Manchester United struggled to compete in the transfer market – not only the fault of David Moyes but also Ed Woodward who is somewhat of a rookie in this area.

Lest we forget that Nemanja Vidic is already jumping ship at the end of the season to join Inter Milan – so the retention of the top talent they have will be difficult.

Looking back in hindsight at the appointment of Moyes – he had no experience dealing with the big characters and had no silverware listed on his CV. From a completely cynical perspective, did Sir Alex Ferguson appoint someone who he knew would do a poor job to make what he did at the club seem more impressive?

Moyes could not continue breaking record after record, he had to go. Even if I did not agree with the manner of the banner, you could not argue with the content – Moyes really was the Wrong One.