How To Get People Ready For Promotion Before Being Promoted

Many surveys have shown that growth and development are two of the driving forces behind people’s engagement at work, helping them benefit and get rewarded for the hard work and effort they put into their jobs.

How do people benefit from that extra discretionary effort?

In most cases, it’s seen as either a development opportunity or a promotion.

It creates chances for people to stretch themselves to the next level and become more valuable to the business.

But have you noticed how many people are promoted into a position and then find the initial stages of the work too daunting or stretching for them, hence causing them to lack the productivity skills needed to be a success in the new role, even for a few months?

It’s often caused by taking the leap into a new role without much preparation for the challenges it will bring.

We often see it on our management training, where managers state they have been in the role for many months, yet haven’t received any training or coaching to make them successful.

In fact, it’s often reflected in the following model, called the ‘Rhombus’ or ‘Diamond’ Model. 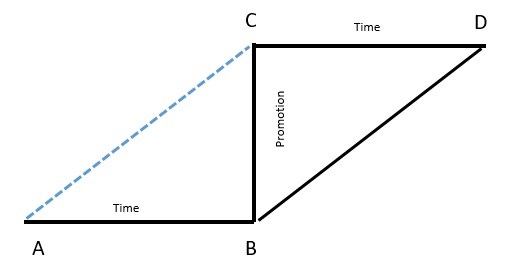 In this model, the starting point is ‘A’

Over a period of time, the person may be doing an excellent job in their specific role, so good that they are considered for promotion.

At a future date (Point B), they are promoted to that new role (Point C).

But because they haven’t had much development for the position, the learning curve takes some time to be properly adjusted to, and the results follow the pattern from point ‘B’ to point ‘D’.

They aren’t producing at the level Point C requires.

This means that the productivity is relatively low until the person, through learning on the job, or through coaching, gets to the position where they are able to produce at the required level (Point D).

How, then, can we narrow the gap between where the person is and where we want them to be, and do it in double-quick time?

We need to get the person from Point A to Point C much quicker.

If we do that, we get them skilled up and producing as their feet hit the ground and they are now running, rather than walking (or even standing still!)

So the model shows us that we need to be developing the person in the skills they will be needing before they take the promotion.

This means having a specific development plan in mind for the person, creating coaching and mentoring opportunities whenever possible, so they have the chance to learn the concepts and ideas even before they assume the position.

Let’s say you have a sales person who you feel has the natural ability and desire to take on a senior sales role, with maybe some supervisory responsibilities.

Before that person is given the more senior role, you could start by coaching them in some of the processes they will need to carry out when the role becomes theirs.

It may involve understanding new software, or the management of reports and projects they hadn’t been used to before.

Or it could entail having some salespeople reporting to them for certain projects or accounts.

By immersing the salesperson into these new roles, you get them to learn new ideas and concepts on-the-go, so that when the opportunity offers itself to take on the senior role, they can hit the ground running, and the learnings can be quickly applied.

In effect, they have taken the route from Point ‘A’ to Point ‘C’ in the model, missing out Point ‘B’.

This will help them develop their skills and prove their fitness for the role before they actually get the role permanently.

It will also give them a picture of what the expectations are for the role before they carry it out, and see what it all entails.

Take a look at this model in detail and see how you can apply it to the next person who you feel has promotion potential in the future.