The Business Of Ethics 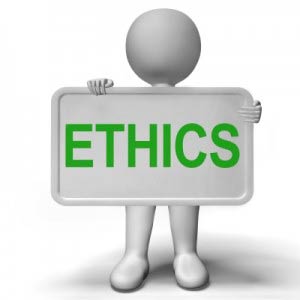 I have recently been thinking about a question I saw on the Charted Management Institute’s website, which was: “Have you ever been asked to do something at work that you felt was unethical?”

I most certainly have, many times and sometimes at the direct order of my immediate superior. When this happens it makes for an extremely uncomfortable ‘no win’ situation for the employee who faces a choice of disobeying a direct command, or doing something morally wrong and in some cases even illegal. The other choice is to report your boss to your own Human Resources department. This option is usually “career limiting”.

In one example a few years ago I was told to offer the training manager at a major corporate client an iPad in return for bringing a significant order forward so we would hit our team target. I was already substantially over my target so felt the request was unfair. I also questioned it morally.

I also doubted the common sense of manager in thinking that an employee of 25 years would risk his entire job and pension in return for an iPad? I decided not to even ask him and instead I lied to my manager when asked if I had done it. In hindsight I should have been honest and just said NO, but as stated above that might have been career limiting.

Legislation and new moral standards have helped to reduce unethical behaviour but you only have to watch the news on a daily basis to hear one business scandal after another! I have a saying on this subject; “If you must win at ALL costs, then be willing to pay the PRICE!” Many have ended up bankrupt and imprisoned due to their behaviour.

So where do you draw the line between corporate hospitality and bribery? Many organisations have banned their people from attending supplier incentives like race days, football matches and the like but I know of many employees that take the day off and go anyway!

As members of the public we are enticed on the High Street to go with one brand or another by endless offers and inducements. The latest fad is ‘cash back’, for example; “buy this camera and get £150 cash back” surely this is just the same as what larger business are doing with their Business to Business clients?

We haven’t even started on the ethics of businesses that exploit their vast buying power (like some Supermarkets) or foreign suppliers using forced or child labour in terrible working conditions.

I for one try to buy products that are fair trade and I certainly avoid companies that flout taxation laws to maximise profits. I think more and more people are doing the same. This problem cannot be stopped by legislation alone, it takes people power to say ‘enough’ and demand ethical standards from others.

*Jumps off soap box and returns to ethical work*