What’s The Best Definition of Leadership? 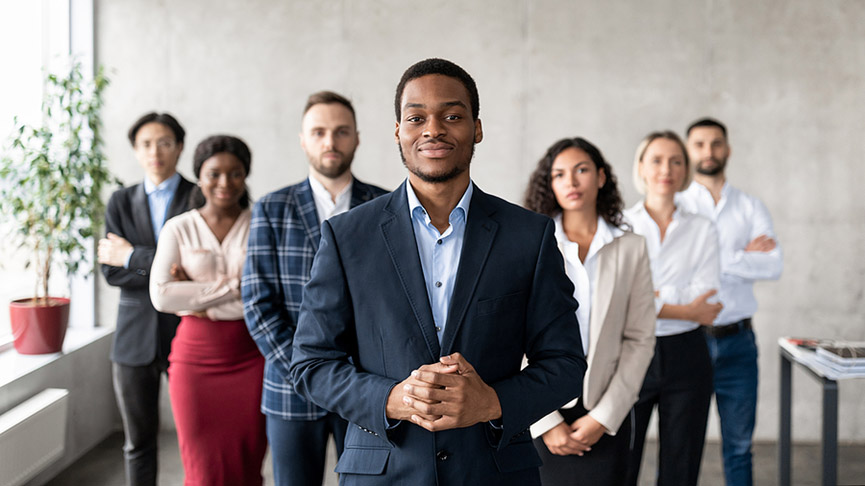 What does leadership mean to you? It’s a key question that we ask on our Leadership Development Training Programmes. Leadership seems to mean many different things to different people. Everyone has an opinion on what makes a good leader. This may be, in part, because there are competing theories on functional leadership and a range of different situations which require a different leadership style.

Let’s begin by looking at a range of leadership definitions from those whose opinions should count most – high profile leaders themselves. The Meaning of Leadership according to 20 Experts

Here, in their own words, is leadership according to 20 leaders:

1. Peter Drucker, Management Consultant and Author
“Leadership is the lifting of a man’s vision to higher sights, the raising of a man’s performance to a higher standard, the building of a man’s personality beyond its normal limitations.” [source: Drucker Institute]

2. Sir Richard Branson, Virgin CEO / Entrepreneur
“Whatever your style, whatever your method, you need to believe in yourself, your ideas, and your staff. Nobody can be successful alone, and you cannot be a great leader without great people to lead.” [source: The Telegraph]

3. Indra Nooyi, CEO PepsiCo
“If you can get people to follow you to the ends of the earth, you are a great leader.”
[source: CNBC Interview, 2008 via ICRM India]

4. Warren Bennis, Organizational Expert
“Leadership is the capacity to translate a vision into reality.”
[source: Journal of Property Management, vol. 73, no. 5, Sept.-Oct. 2008, p. 13]

5. Douglas McArthur, WWII General and Chief of Staff
“A true leader has the confidence to stand alone, the courage to make tough decisions, and the compassion to listen to the needs of others.”
[source: Forbes Magazine]

6. Bill Gates, Founder Microsoft
“As we look ahead into the next century, leaders will be those who empower others.” [source: inc.com]

8. Andrew Carnegie, Businessman and Philanthropist
“No man will make a great leader who wants to do it all himself, or to get all the credit for doing it.” [source: St Louis Globe-Democrat, 1899, quoted in Forbes]

9. Seth Godin, Dotcom Entrepreneur and Author
“Leadership is the art of giving people a platform for spreading ideas that work.”
[source: Godin, Tribes: We Need You to Lead Us, Portfolio, 2008]

11. Jesse Jackson, Reverend and Activist
“Leadership cannot just go along to get along. Leadership must meet the moral challenge of the day.” [source: Forbes]

12. Elon Musk, CEO Tesla, SpaceX
“The duty of a leader is to serve their people, not for the people to serve them.” [source: Twitter, reported on Livemint]

14. Theodore Hesburgh, former Notre-Dame University President
“The very essence of leadership is that you must have vision. You can’t blow an uncertain trumpet.” [source: Keepinspiring.me]

15. Donald McGannon, Broadcasting Executive and Pioneer
“Leadership is an action, not a position.” [source: Under30CEO on Twitter]

16. Sheryl Sandberg, COO, Facebook
“Leadership is about making others better as a result of your presence and making sure that impact lasts in your absence.” [source: poetsandquants.com]

18. Tamra Ryan, CEO, Women’s Bean Project
“A good leader is able to paint a picture of a vision for the future and then enlist others to go on the journey with her.”
[source: workflowmax.com]

19. Marco Rubio, Senator
“We live in a society obsessed with public opinion. But leadership has never been about popularity.” [Source: CSuite Mind]

Difference between Leadership and Management

The last quote in the list above is my personal favourite. There is a significant difference between being a great manager and a great leader. There’s a requirement to have both management skills and leadership skills. It’s just that they both have a different focus. Leaders need an extra component: inspiration.

Of the leadership definitions we found, a full third of them place significant weight on inspiring others to follow a particular course. The manager has authority, but the leader makes those under them want to work towards a shared goal.

On a practical front, management is about following, as successfully as possible, a set of agreed and proven processes and procedures.

Leadership is about encouraging and supporting others to achieve their best. Even Elon Musk, one of the more eccentric CEOs on the above list, expresses this opinion when he says that a leader must “serve their people.” What makes a Great Leader?

Looking at our inspiring leaders and what they say about their own leadership, can we pull together some conclusions? There seems to be a consistent set of skills that leaders possess.

One of the commonest themes is that leadership is the tendency to surround yourself with the right people. This is a compound skill including the ability to spot potential, both inside and outside the company. It also involves being able to inspire and direct talented people and empower them to achieve all that they can, benefiting both them and the company. One of the key skills to nurture talent is coaching.

Being brave and bold in envisaging what the company might become is a vital component of leadership. Having a clear vision for the direction the company takes is another popular theme with successful leaders.

Sometimes this leads the company in an unexpected and, at first, perplexing direction. When coffee machine vendor Howard Schultz decided to demonstrate his products in action with a European-styled coffee house, the Starbucks we know and love today was born.

Today, popular leaders are empathic ones. Gone are the days of tyrants frightening employees into submission (though there may still be some bad managers adopting this approach). Leaders who pay at least some attention to what employees want and the direction they prefer for the company tend to prove more successful. Emotional intelligence is a vital skill for the modern-day leader. Test your EQ skills here with a free assessment.

One of the downsides of leadership is the need to make difficult decisions. Decisions such as closing a branch, stopping a product line, pivoting away from the company’s original vision or which staff you need to let go. There may be times where unpopular decisions are the only way to make sure the business succeeds.

Leaders are those who step into the fray in times of crisis, rather than shy away from making a move which may prove unpopular.

Employees and other stakeholders consider it important that their leaders have integrity. A 2019 German study found a 65% correlation between employees believing their leaders will do the right thing in an ethical crisis and overall trust in the company. Trust builds a desire to work hard and perform well.

Being a leader noted for integrity makes it easier to attract talented people to your side. It also allows you to legitimately lead by example and ensure that those working under you are people of integrity too. Given how many different aspects of leadership are considered important, it’ll probably come as no surprise that there are a host of different leadership styles and models, each emphasizing a slightly different mix of skills and abilities.

Here are just some of the other ways theorists have tried to understand leadership.

• Delegating – taking a very hands-off approach.
• Participating – working alongside a team to inspire them.
• Selling – persuading a team to work on your idea.
• Telling – fully directing the actions of employees.

A leader might most frequently follow a participatory approach but shift to a telling mode when there’s a crisis that needs speedy action (say, a hostile takeover attempt). 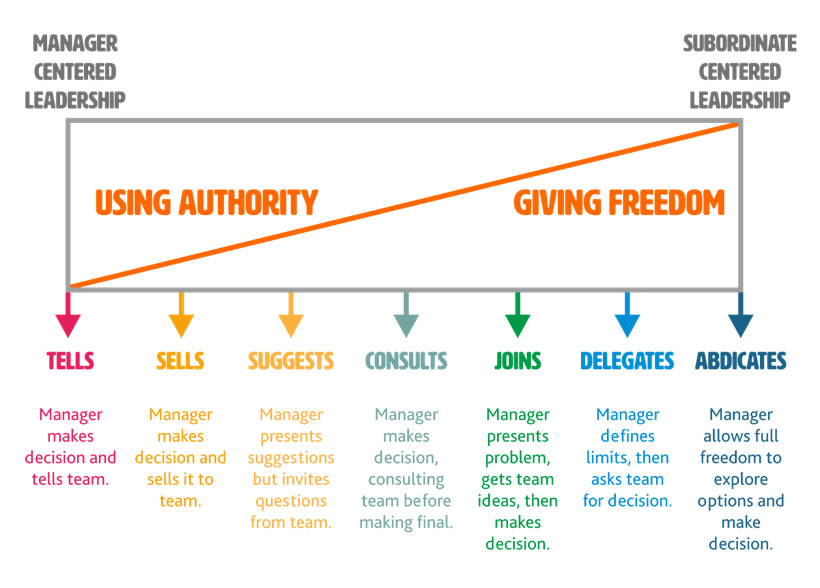 This is an expansion of the Hersey Blanchard model, creating a continuum based on the degree of freedom a leader allows their people. This continuum ranges from telling at the more dictatorial end of the spectrum through to full abdication of responsibility (an extreme form of delegation) at the other.

Most leaders inhabit the space in the middle of the continuum, with the most extreme ends indicating pathological tendencies which work against a modern company’s needs.

The Servant Model of Leadership First expressed in 1970 by Robert Greenleaf, this model reverses the usual role of a leader who has “underlings” doing their bidding. Instead, the leader considers what actions to take to serve their employees needs in the workplace. It’s what Elon Musk, Peter Drucker and Bill Gates are all alluding to in their leadership quotes.

Empathy and a commitment to the personal growth of employees are the main markers of this approach. Researchers Sipe and Fick extended Greenleaf’s idea by identifying seven pillars of a servant-leader:

• A person of integrity,
• Who puts others first,
• Is a skilled communicator
• With foresight,
• A compassionate collaborator
• And a systems thinker,
• Who operates with moral authority.

If this sounds like a tall order, it’s not meant to be an easy style to adopt. The servant-leader paradigm is a goal or endpoint that might take years to achieve. 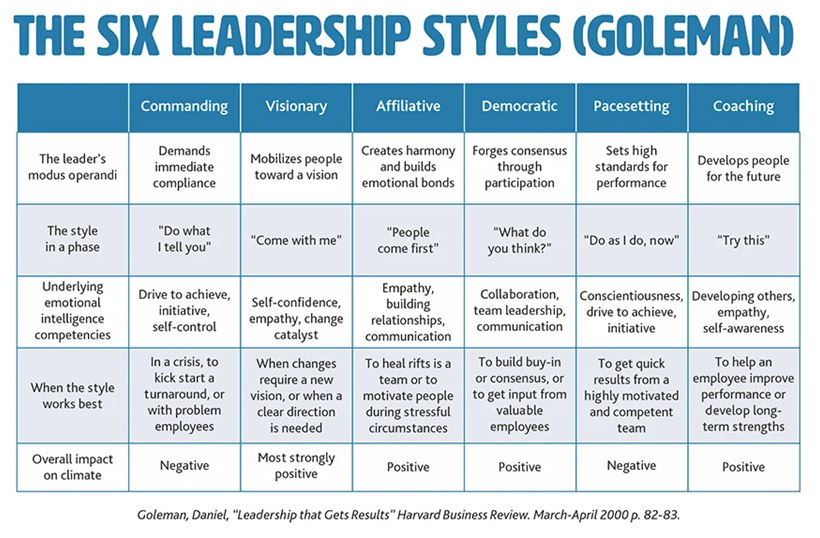 The Servant-Leader style doesn’t place much emphasis on another aspect of leadership – vision. Entrepreneurs may favour this approach since they often fight an uphill battle to get both employees and investors on board with what they are trying to achieve.

Author and psychologist Daniel Goleman identified his own six styles of leadership, of which visionary is merely one branch. However, it is an extremely popular one in the innovative, fast-paced world of entrepreneurs.

Steve Jobs was a classic visionary leader, as is Richard Branson (who even takes his adventurousness to extremes with space exploration and record-setting). 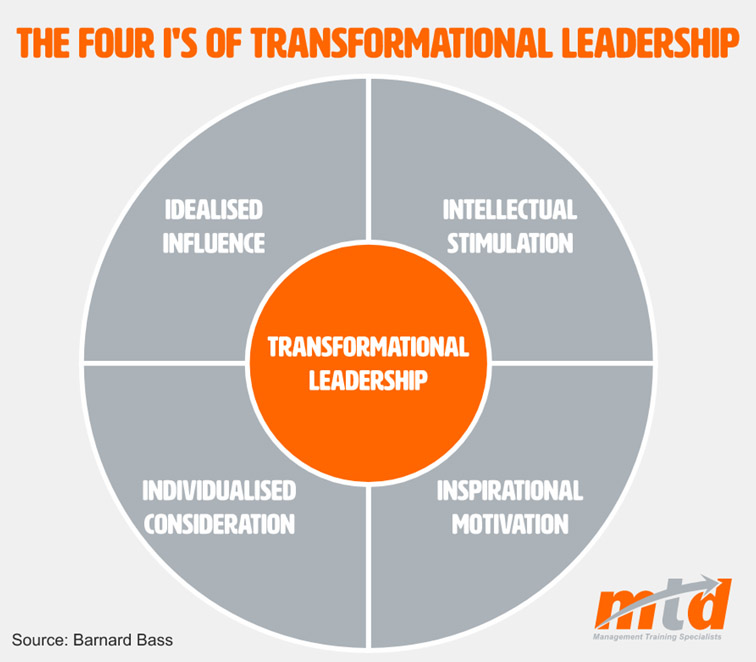 Another way to think of leadership is by considering how leaders are motivating their subordinates. Transactional leaders strike a bargain with theirs – “if you do this, then your rewards will be…”

This approach contrasts with transformational leaders, as defined by James MacGregor Burns in 1978. These leaders’ promise is to develop the abilities and careers of their employees, rather than merely offering short-term rewards such as promotions and bonuses.

While the transactional approach might work very well for crisis situations (such as getting employees to work overtime to hit a vital deadline), it’s not as effective for long-term growth, MacGregor Burns explains. Transformational leadership is very much a given in 2022, with employees valuing development opportunities very highly. 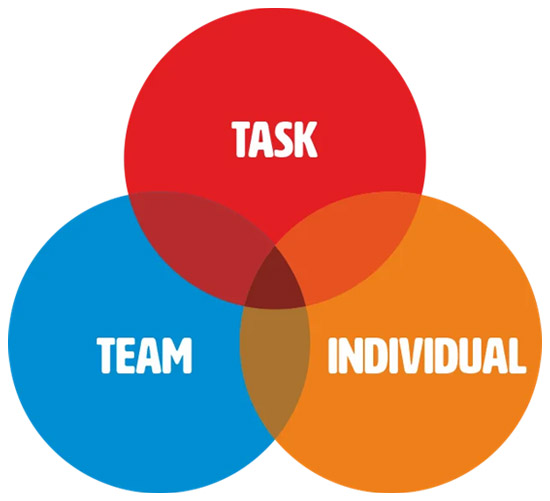 Leadership trainer John Adair developed this model in his 1973 book “The Action Centred Leader.” This is a very pragmatic approach to leadership, which breaks down the responsibility into three strands:

Thus, Adair combines a practical task-focused approach with more empathic and transformative aspects. Leaders must focus on all three components of their role to achieve maximum success.
Keeping an eye on all three zones of leadership means that tasks are completed by cohesive teams whose individual members feel fulfilled.

This blog has discussed the definition of leadership and I hope you found it useful. You can also lead yourself and this is known as Self-Leadership – check out that link. Please contact us to discuss any Leadership and Management Training requirements you might have. We also offer Leadership Apprenticeships at Level 3 and Level 5.